God has strategically placed His children in various parts of the business world to live out God’s will while upholding Christian values. From oil company such as Folorunsho Alakija‘s Famfa Oil, to car dealing company such as  Cosmas Maduka‘s Coscharis Motors. These Christian businesses are on the forefront of not only providing stellar services, but also fully living out the gospel message.

America is not lacking in these christian businesses too, infact some of them have taken it a step further and actually post Bible verses and Christian references on their products. Some of these “hidden” placements might surprise you, but the messages are sure to inspire.

Clothing brand Forever 21 was founded by Don and Jin Chang. The devout Christians moved to America from Korea in 1981 and proceeded to grow a clothing empire. What some might not realize, though, is that “John 3:16” is printed on the bottom of every bag.

That scripture reads, “For God so loved the world that he gave his one and only Son, that whoever believes in him shall not perish but have eternal life.”

The Forever 21 Bible verse decision is yet another inspiring one to take into account as you do your shopping.

One of the most well-known brands to place scripture on its products is In-N-Out Burger. The fast food chain prints verses, including John 3:16 — a reference to one of the most popular verses in the New Testament — on the bottom of cups and wrappers.

The In-N-Out Bible verse is pretty inspiring, but not surprising, as the company has a rich faith history, as do many of the other companies who include scripture on their products. Deseret News has more:

Rich Snyder was a born-again Christian and the founder of the West Coast fresh burger company. Early on, Snyder decided to use his company to share his beliefs. The company has continued to do so ever since.

The Christian company has also included references to other scriptures, including Proverbs 24:16, which reads, “For though the righteous fall seven times, they rise again, but the wicked stumble when calamity strikes.”

Anyone opening a carton of Goldhen eggs (sold by Aldi stories) will notice something under the top cover: An inspiring Bible verse. Under each carton of eggs customers will find the text of Psalms 118:24. The scripture reads, “This is the Day which the Lord has made; Let us rejoice and be glad in it.”

Aldi shoppers have said that the eggs are packaged by Rose Acre Farms, which also has the Bible verse prominently displayed on its website. The Aldi Reviewer reached out to the farm and received this backstory on the verse’s placement on cartons:

“The Bible verse came about on our cartons from our founder, David W. Rust, who held that verse special to him throughout his life. He had it placed on Rose Acre Farms egg cartons in 1980, where it has remained to this day! It has always garnered letters of sincere appreciation from customers all across the USA as a positive message of hope.”

Pretty inspiring to see businesses that are influenced by biblical values. 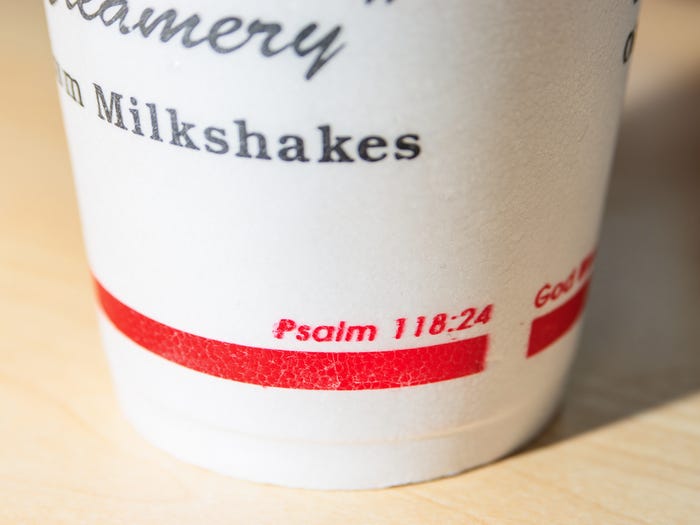 It seems In-N-Out Burger isn’t the only fast-food company to jump into the Bible verse mix. Cook-Out, a southern chain, also includes Bible verses on its products, according to Business Insider.

Cups and products include verses, and Christian music is played at some of its locations — something that creates what the Knoxville News Sentinel called an “uncommon Christian atmosphere.”

Trijicon, which makes optical sighting equipment for firearms, encountered controversy in 2010 when ABC News discovered the company was putting coded references to Bible verses on its products.

The Trijicon ACOG (Advanced Combat Optical Gunsight), for example, has the inscription JN8:12. That refers to John 8:12: “When Jesus spoke again to the people, he said, ‘I am the light of the world. Whoever follows me will never walk in darkness, but will have the light of life.'”

“Trijicon places a small biblical reference on the products we sell,” the company’s website reads. “It is a tradition started by our founder and we continue it as a reflection of our company values,” it continues. “Although Trijicon has now offered to remove these references for military issued products, we will continue to inscribe our consumer products with biblical references.”

In Nigeria, it is not uncommon to see a company have bible verses or Christian references on their products, their offices and more without suffering controversy. Nevertheless, most of the big companies do not necessarily put these verses and references out in the open. Some of the companies mentioned above have suffered serious controversy but stood their ground and upheld their Christian values in the face of opposition, thereby returning the glory to God.

Music Repartee With Alex: The Day Sinach Made Mercy Chinwo Cry A River

Upclose: What Apostle Joshua Selman Told Me Before Release Of “Spirit Of Victory” – Jephthah Idahosa Aigbe