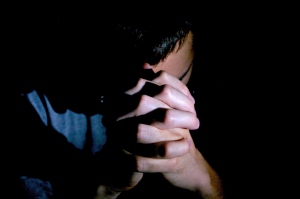 Oliver Riley paced the hospital lobby dejected. He would look at the ceiling and say little prayers like he can actually see God. The report in his hand shows there’s nothing insurance can do for him anymore if he does not look for money.

The room temperature was cool but Riley was sweating profusely. There were people in the lobby but he felt all alone in the world. Just two years earlier, his wife gave in to cancer, guess his daughter’s heart could not take it, now he’s about to lose her too to a heart disease!

He peeped at her through the sealed glass window as she laid unconscious. Riley’s heart sang and hot tears trickled down his face. Yet, a voice in his head kept repeating that bible verse to him saying: “He will keep him in perfect peace whose heart is stayed upon Thee.”

He looked up to the ceiling again and said to God:

“Dear father, Everything you do is good and you are just. I know you love Sandy but can you still keep her here with me?” He broke down to his knees and wept bitterly “I can’t lose her too.”

In a moment of spasm, he got up determined to find the money and get his daughter out of her state, he drove down to his office. It was late in the night so there was no one around.

“I can do this and get away with it, and if I perish, I perish,” he said as he brought out the bunch of keys and opened the safe deposit box.

Suddenly light filled the room, it was so bright and Riley panicked thinking he has been busted. He lifted up his face and saw a man clad in white and from him radiated the light.

“Riley what are you doing?” He asked calmly

“And you think if you take this money with you, you’ll save her?”

“Well…” He stuttered, “I… I have to weigh my options… I have a better chance at this with financial support, I can’t afford to lay all my eggs in one basket.”

The man moved closer and touched Riley’s shoulder, “Riley not a single strand of your hair falls that the father does not know about, there are no options Riley, its just one egg but it’s in God’s basket.”

The man gave Riley a reassuring smile and walked out the door, the light dimmed and Riley was all alone once more. He locked up the safe, the office and drove back to the hospital with no idea of how he will get the money.

As he approached the entrance, one of the nurses ran up to him she seemed excited but was tampered with a feeling of urgency.

“Mr Riley; Mr Riley,” she spoke hastily, “its your daughter, she’s asking to see you. She got out of comma and said she’s feeling alright… That’s aside the slight headache. The doctors are attending to her now… Its a miracle Mr Riley!”

The ward is just on the second floor but it felt like Riley’s longest run. He busted into the room amidst doctors and their assistants, held his daughter and wept for joy.

Thank you for past comments and Likes. Let’s know your views on this one too. God bless!

SelahTV: Isabella Let In On Her Personal Alter With “The Secret Place Rendezvous Live”